If perhaps by accident, or epiphany, it became clear that he was destined to own his own business. The only real question... In what area?

A friend was having quite a time stealing cars for a living, legally. The buddy was a repossessor. Danny, as usual, interviewed well. He was in. The job was countless hours of boredom peppered with far too few adrenaline fueled moments. Just as this vocation was apparently winding down, he noticed many accounts were lost to outside agencies. Private investigators stepped in and located the “skipped” subjects for the bank.

Fast forward a year and Danny was running his own investigation and collections firm. He filled a niche market, and did well. Living the dream, great money, flashy cars, and a homeowner at twenty eight. The only problem was the time commitment required. Although banker’s hours aren’t exactly drudgery, He yearned for more time off to travel.

Within a decade he had built an impressive portfolio. He owned four homes including vacation properties in the tall cool pines, and the sands of Mexico. Again he felt it was time for a shakeup. While researching his next business venture, he remembered his time as a merchant teller at the bank. There was a particular depositor that always struck a cord with him. The gentlemanly customer owned several coin operated Laundromats! The only part of the business that Danny saw was the weekly deposits. The guy would ironically enough bring his dollar bills wrapped in bundles of a hundred filling a laundry basket!

When he began to seriously research the investment potential of Laundromats Danny noticed one thing, the gross lack of good information on the subject. Trying the internet, data bases, even the local library turned up next to nothing. The questions he had far outweighed the knowledge base. Finally, he turned to the telephone. Strangely, the first laundry equipment distributor he reached was the very man who had piqued his curiosity some decades earlier.

With the “Gentlemanly Customer’s” Son’s tutelage Danny was on his way to owning several successful, all cash, and recession proof businesses of his own.

Danny has experienced just about every aspect of the Laundromat business. Having sold all of his stores, he's found his niche. Mentoring business minded individuals in the coin operated laundry business! We know why you're here. YOU already researched Danny's success stories, NOW become on of them!         Danny is a SHARK, who wants to learn business from a pussycat? 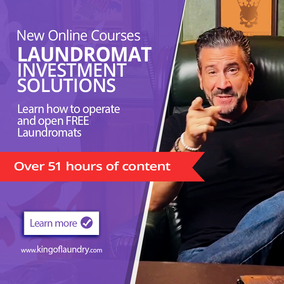 Don't learn anything, Email us and we will REFUND every penny. No fine print. No questions asked. What are you waiting for?

​A native New Yorker, Danny D’Angelo was born in Brooklyn, and now calls Cave Creek, Arizona his home. The Navy veteran never had trouble finding work, and in fact had several jobs that most would consider “careers”. He noticed his coworkers saw these as opportunities worthy of a lifetime’s commitment, and a meager pension or 401K their just reward. Danny’s make-up was just different.

As a national bank’s merchant teller, he quickly learned the ropes and became bored with the repetition. As the youngest car salesman at a luxury dealership, while the money was good, he noticed the goal of his compatriots was to “tie one on” nightly. While toiling as a baggage handler, the benefits were numerous, but even the chance to advance to management seemed a bleak existence. Always the “Funny Guy” he even tried his hand as a standup comedian! Throughout his twenties Danny had churned through dozens of professions. It seemed once he learned the minutia of a field it was simply time to move on.

Sign Up for Danny's Newsletter
It's free, you need it.

You found this website and Danny for good reason. You want to own your own cash business. The first step? Get the one and only, acclaimed

"Cleaning Up In Laundromats" DVD (Now available for immediate download)

​About DANNY, about TIME!

You want a​ cash laundromat business - FIRST get an education!​

NO ONE will do it for you.

Want to own laundromats?
​Do it for free.  GUARANTEED